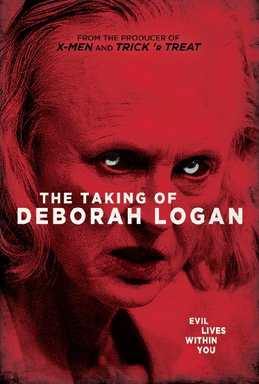 *Please note, there are some spoilers in this review, if you haven’t watched the movie yet…you know the rest*

This movie was almost being force fed to me; it showed up in most of my horror related lists so, I finally gave in. It’s important of me to note, when I first noticed the movie on Netflix some months ago, it initially had a rating of one star; now it has a 4 star rating.

The Taking of Deborah Logan begins with an introduction to Mia, who is filming her PhD thesis with the help of Gavin and Luis. The emphasis of the documentary is the effect of Alzheimer’s, not only on the patient but on the primary caregiver, Sarah who consents to the cameras.

As the film crew gets comfortable with the family, Deborah’s behavior escalates. We hear about Deborah’s past life as a switchboard operator for the community and how she became a successful business owner and single mother. The heartwarming stories of Sarah’s childhood provide a bit of a slow start to the action but it really endears you to the story.

Deborah’s Doctor insists that the disease is spreading at a rather aggressive rate and changes the medication to reflect that change; meanwhile the film crew and Sarah start to experience things more in the realm of the unexplained.

One night, Deborah is caught on film as she leaves her bedroom and makes her way outside where she is found pounding the earth with her bare hands. Mia cleans up a seemingly confused Deborah and gets her settled while the film crew calls her and Sarah’s attention to something alarming caught on tape; something impossible with no break in the film nor a reasonable explanation for how it would be possible.

Sarah, concerned for her mother’s safety confronts her the next day about her behavior, Deborah reacts angrily and tells her that she doesn’t need her here.

The film crew decides to show Deborah the captured footage while she is on camera herself, in an attempt to get her to understand their concern, an attack occurs and Deborah is back in the hospital and under the care of her doctors.

Her concerned doctors ran more tests to try to explain all of the anomalies in her medical condition as well as changes in her skin. Deborah becomes increasingly more violent toward herself while her doctors recommend more specialists to run tests.

It becomes quite clear to Sarah, Mia and the crew that something more was going on. Deborah is found seemingly having a nervous breakdown in front of her old Switchboard, shaking and babbling in french. They pulled the sound off the video and they hear “the eternal serpent will free you child” and “be my fifth” among other equally creepy things in French.

Sarah consults with Harris, their long time neighbor to see if he knew why her mother would be speaking french and Harris tells her to leave it alone; stating that Deborah was being used. You know, the kind of vague shit someone says when they know exactly what’s going on but of course Sarah misses this.

In an attempt to solve the riddle of why she was at the switchboard, they try to trace the customer profile for the number she wrote down before she went into meltdown mode. The name of a local pediatrician who was wanted for the murder of a four teen girls in the area is the name that they stumbled across in their search. The girls were found with a serpentine symbol on their faces, bodies cannibalized and rattlesnake venom in their stomachs.

Desjardens, the pediatrician, disappeared after he attempted to complete a demonic ritual which required an offering to the gods in an attempt to gain immortality. Experts state that the ritual was not completed as 6 girls would be needed and only 4 were found.

When Sarah questions her mother about Desjardens, her mother plainly states, after very little pressing, that Desjardens is dead and it was murder. Deborah runs to the bathroom from the dinner table where they find her a few seconds later, on the floor with what seemed to be vomit but it was of soil and earthworms which earns her another trip to the hospital.

Sarah attempts to confront Harris about Desjardens, knowing that there was not much her mother would be involved in that Harris wouldn’t know and gets frustrated with him as he continues to deny.

Mia’s theroy is that Harris killed Desjardens when he found out that he was responsible for the the death of the young girls and that Deborah knew and was covering for her friend. As they argue the plausibility of that theory, Harris shows up and start unpacking some shotgun shells into the film crew’s car.

The police are called and the Sheriff shows up before too long to arrest him. We see Sarah and the Sheriff talking and it’s clear that the ladies have a more intimate relationship.

Sarah eventually meets with another doctor who told her about a similar story with a woman who started to take on the spirit of her dead son and in effect, became him because she lost her mind and it was easy for the spirit to manipulate her.

Harris decides that it’s time to take Deborah out at the hospital but his plan backfires as the footage allows us to see that the t.v. in the hospital room removes itself from the cage and hits him at the back of the head as he is trying to suffocate her with the pillow.

Sarah and crew hears of this new development and race to speak to Harris before he is too far gone. Harris tells them that Deborah overheard Desjardens on the switchboard; Sarah was his next intended victim. Deborah got to him before he could get to Sarah and they buried him alive in the garden.

The remainder of the story plays out in a way that completely ties the supernatural and natural elements of the film together seamlessly. The Taking of Deborah Logan is well casted with a group of talented actors that you really wouldn’t expect to do horror, particularly Jill Larsen (Deborah Logan) who I’m familiar with because of her extensive television appearances in shows like All my Children and As the World Turns. Sarah, portrayed by Anne Ramsay is also a well seasoned television actor. These two women provide the backbone for a very topsy turvy movie; that really makes you think about the lines that can be blurred between sanity and the supernatural in a very realistic way.

Jill Larsen and Anne Ramsay made a horror movie that was for a more adult demographic and because it’s set in such a way, it makes how the story even more terrifying than if it happened to a bunch of asshole teenagers who were camping in a forest. The supporting cast of the grad student and film crew, helps balance the movie for the younger viewers; as they are experiencing this all as well with you as the movie progresses.

The Taking of Deborah Logan was very satisfying,  I very much enjoyed the direction of the film and the combination of found footage through the aid of the documentary and traditional camera movie angles. I also appreciate that you’re not left to wonder too much after the most traumatic events of the film take place; folks are dead and the cops came knocking.

I’d give this movie a 7.5 out of 10 with a recommendation that you should give it a try if you like more realistic horror (an oxymoron, I know, but you will deal).