This spring we have lots to be thankful for, namely Shingeki no Kyojin | Attack on Titan Season 2 and Boku No Hero Academia | My Hero Academy Season 2 – both of which premiered this past Saturday, on April 1st.

I’m not going to lie, ya girl was shook when she saw April 1st as the release date for Attack on Titan specifically. I’ve been waiting for more episodes since February, 2014. 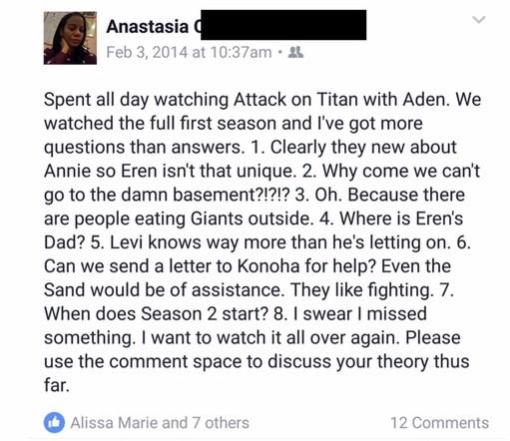 I was ready to run up and let the choppa spray if this was going to be the one time that Spring Anime wanted to be “funny” for April Fools. Ain’t no jokes outchea run me my episode – and they did.

Spring Titles I’m looking forward to, and will actually be watching as it premieres weekly. Please note, I always have way more titles in rotation at any given time that I watch without Tweeting and I’m always open to suggestions.

Attack on Titan S2
Boku No Hero Academia S2
Boruto (How can I not?)
Zero kara Hakimeru Mahou no Sho | Grimoire of Zero
Sin: Nanatsu No Taizai | The 7 Deadly Sins (not to be confused with Netflix’s Seven Deadly Sins)

Our #AnimeMonday schedule rotation will now include Higurashi no Naku Koro ni | When they Cry – as recommended by @carmillalusta on Twitter as we finish up the original Yu-Gi-Oh series.

#AnimeMonday starts at 7:00 p.m. EST every Monday and you can watch along with me via Rabb.it.

I will also be playing the current season episodes (Attack on Ttitan S2 etc) via Rabbit once we decide on the best time on Twitter.

I do Live Tweet as well as maintain the Rabb.it room – so feel free to use the #AnimeMonday or the anime title’s hashtag so we can watch together.